This detached house, located at the top of a slightly sloping plot, was renovated following one guiding principle: to create a connection and spatial continuity between the house and its surroundings, through open-plan rooms visually connected to the landscape. The choice of materials—in which wood and natural colours such as stone or sand predominate—helps to reinforce this idea.

Balance between tradition and modernity

The home’s façade features both recovered dry stone walls and a sizeable band of mortar at the top, which pushes the hip roofs into the background. Thus, aside from consolidating the outer face and bestowing it with a modern style, it creates a penetrable structure, with setbacks around the entire perimeter that give rise to small courtyards, gardens, porches and covered areas.

The house consists of two levels: a basement, which holds the living area and auxiliary areas, plus the ground floor with the main rooms. The latter is organised into two rectangular blocks positioned perpendicularly to offer views of the garden in all directions. One of them holds the porch and public areas—living area, dining area and kitchen—, while the other holds the private areas—two suites, two children’s bedrooms and two bathrooms. The access hub, which is found between the two blocks, connects them to the intermediate area and opens out to a contemplative courtyard.

The layout of the interiors is free flowing and open, with openings and views of the garden and courtyards in all directions from the inside. The pitched roof affords extra height and the exposed wooden ceiling, together with the natural oak slats, lime plaster and dry stone walls, jute rugs and the rest of the decorative accessories and furniture, creates a cosy and traditional atmosphere with a decidedly Mediterranean air. 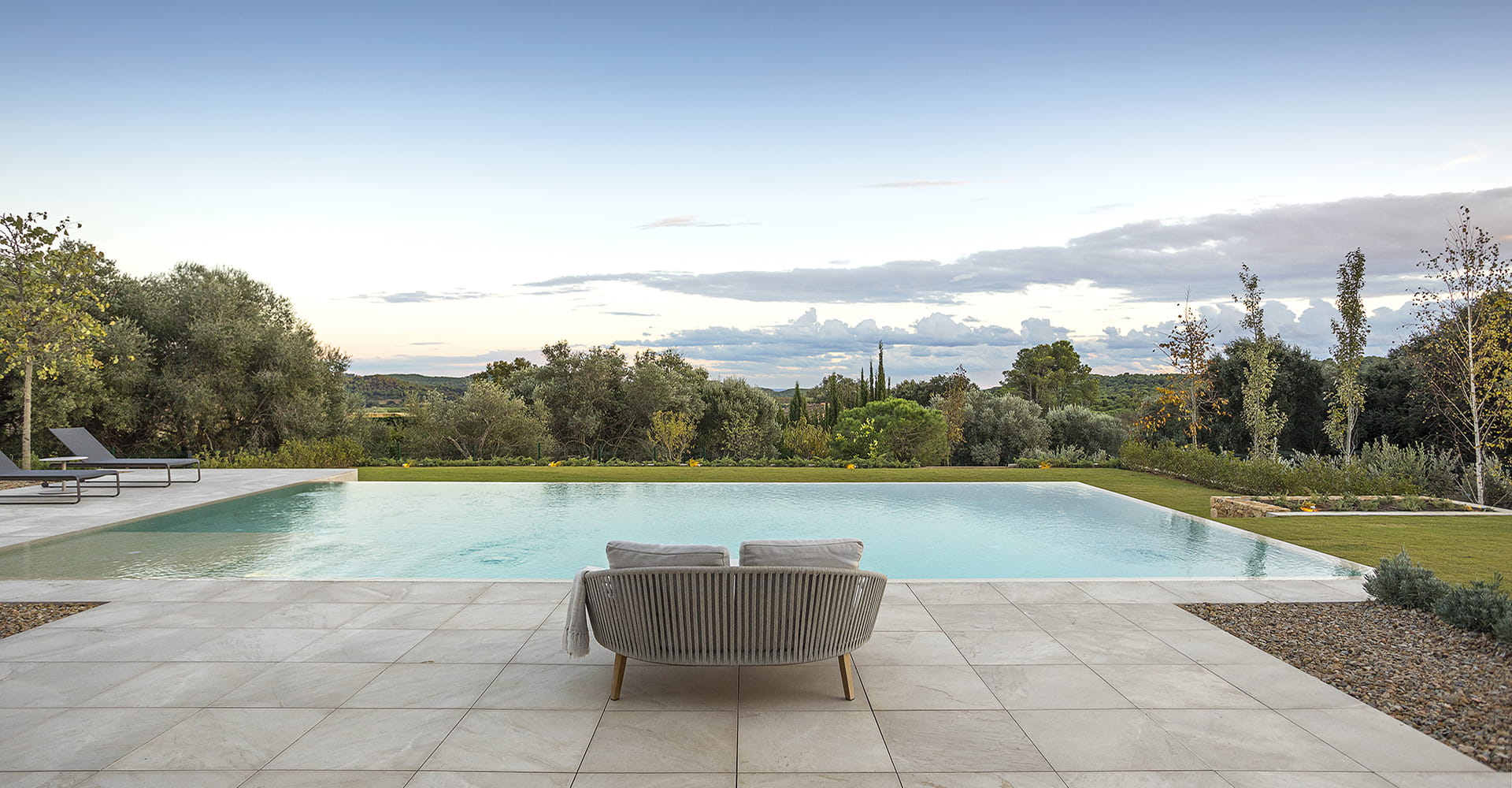 The home’s garden boasts a kitchen with a barbecue and lounge area, designed to be enjoyed in good company any time of the day. The flooring for these outdoor common areas shares a natural stone finish with the indoor areas, showing a link between the areas. A daybed can be found near the pool, offering a more secluded resting spot, from where one can peacefully behold the horizon.

The kitchen, integrated into the daytime living areas 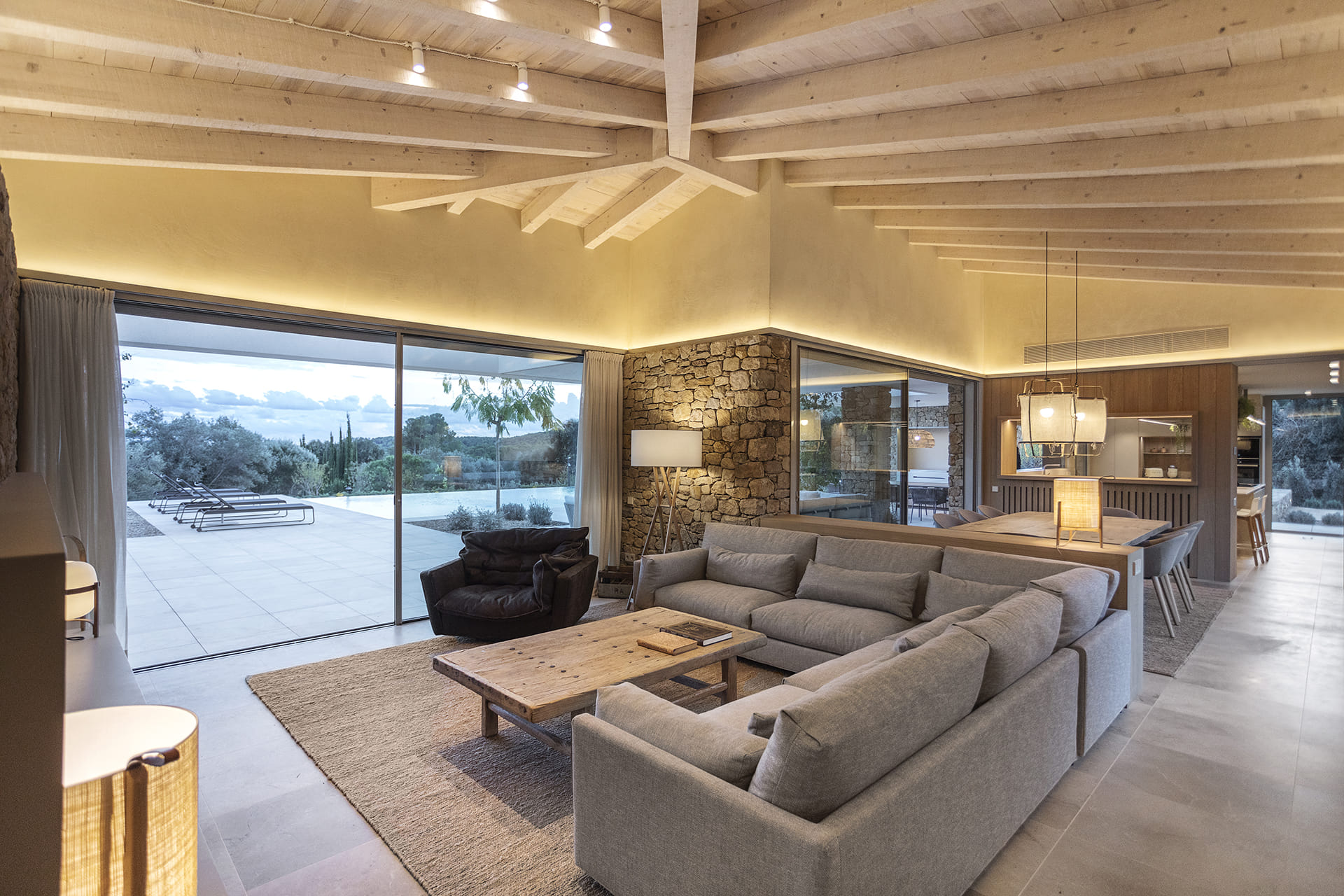 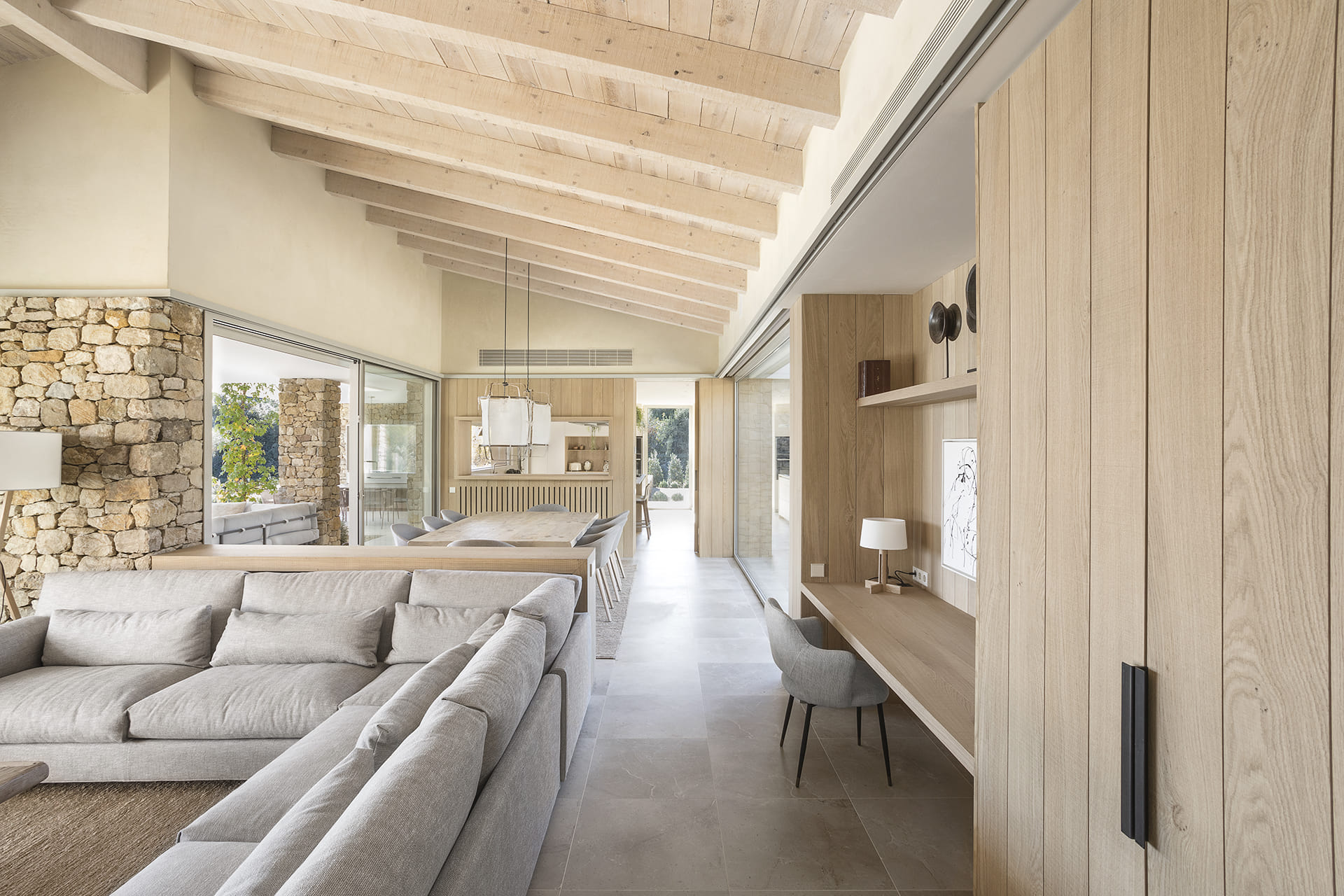 The kitchen, dining area and living area share an open-plan space, with large glazed areas that let plenty of natural light stream in. The kitchen is fitted with Santos furniture, featuring two finishes that seamlessly blend into the home’s interior design: the colour Cashmere and the Synchro Rustic Oak laminate, which accurately reproduces the look and feel of natural oak wood.

The room is laid out around a large central island, which, aside from holding the cooking area and an auxiliary washing-up area, comes with numerous organisation and storage options on both sides. The worktop has an overhang on one end so it serves as a comfortable counter for breakfasts, snacks and quick meals. 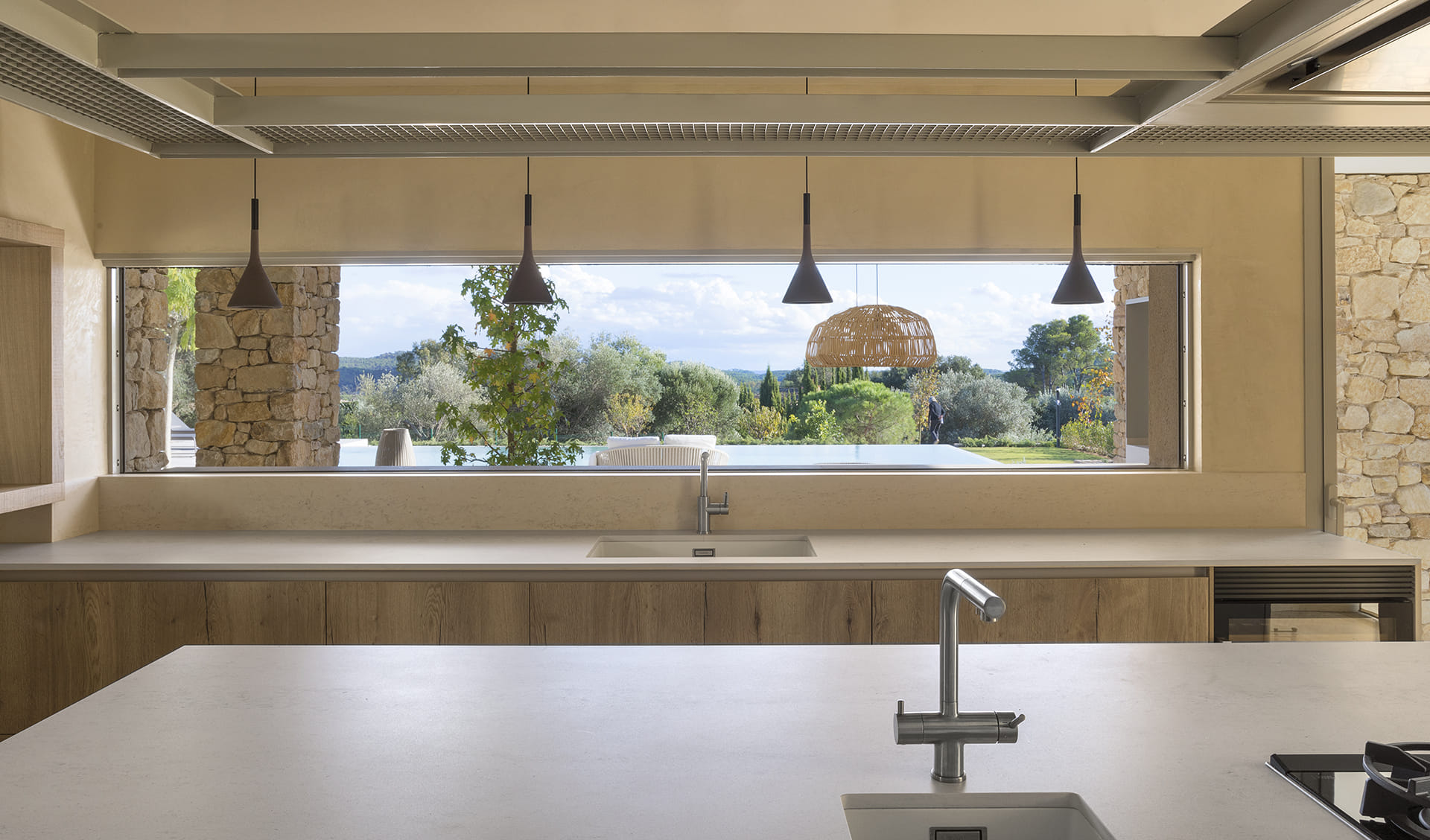 In front of the island is a row of base units where the cooking and washing-up areas are found. A row of tall, wall and base units runs behind the island. Within a compact space, it holds two fridges, three drawer units and an alcove with a shelf and worktop in the middle. The kitchen furnishings are rounded off with a second set similar to the former, located perpendicular to the island. It holds storage units, ovens and an alcove in the middle for containers, decorative accessories and small kitchen appliances. 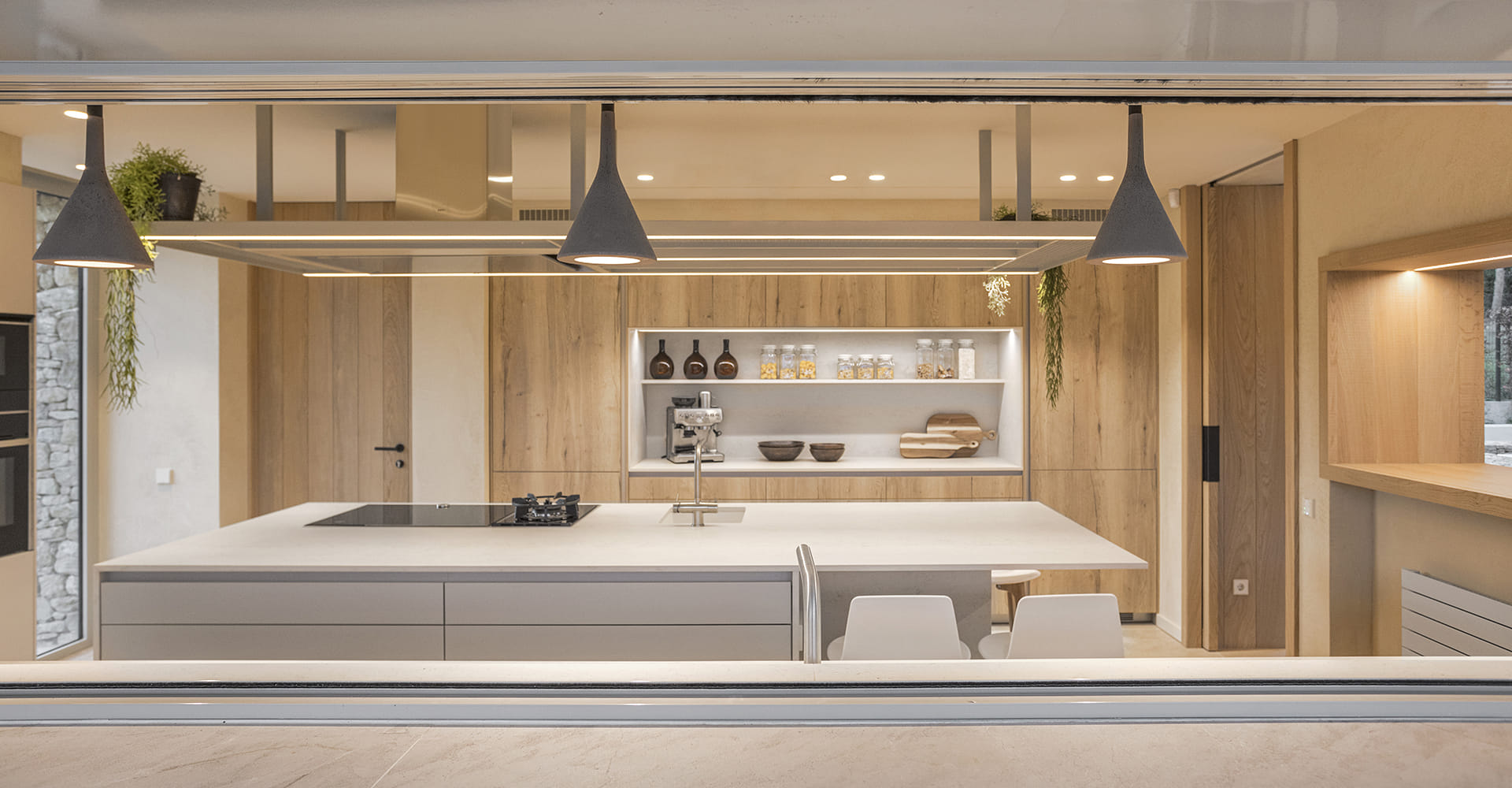 The clean lines and smooth fronts of the cabinets effortlessly meld into the home’s architecture. Furthermore, the well-thought-out kitchen layout makes it possible to have everything within reach, helping to keep unnecessary trips to a minimum when preparing a dish.

Santos kitchens in tourist apartments, by the designer Ana Montarelo

Subscribe and we’ll keep you updated on the latest news on our kitchens.

Looking for ideas for your kitchen?

Do you want a Santos kitchen?

Find the reference and ID code
for your Santos product

1) Locate your furniture’s identifying label. You will find it on the inside of the sink unit in kitchens, or on the guarantee card for the rest of the products.

2) Scan the QR code on the label with the camera of your phone or tablet or manually enter the reference and ID code on this page.

3) If for any reason you are unable to access the identifying label, please ask your Santos dealer for the reference and ID code for your Santos product.

* Registration only available for Santos furniture purchased by private customers from April 2019 onwards.