This flat is located in a 19th-century Haussmann building in a very lively and dynamic area in the centre of Rennes. Its new owners, a couple with two children, were drawn by its charm and prime location. Nevertheless, before they could move in and get settled in, they had to undertake a comprehensive renovation.

Classic and modern in harmony

The flat had structural problems and was excessively compartmentalised, with too many corridors and dead spots. These aspects, coupled with the fact that nearly all the windows faced the corridor, made it feel cramped and dreary. The designer Inma Valero planned a comprehensive renovation, intended to breathe new life into the home to adapt it to the preferences and needs of its users.

Thus, beams were reinforced and partition walls torn down, until only the basic structure remained. The spaces were laid out logically, grouping public areas—kitchen, dining area, living room and TV room—and private areas—three bedrooms and two bathrooms—on opposite wings. What’s more, two toilets were added to the daytime living area, and a living room with its own entrance was transformed into a separate, self-contained flat. The rooms facing the central corridor were separated from it by means of glazed doors and tall glass partition walls, which helped in creating a brighter and more pleasant atmosphere.

In the course of the renovation, distinctive elements of the building such as doors, windows, mouldings, fireplaces and the parquet flooring were recovered. The furnishings and décor seamlessly blend the new with the old, by combining small vintage items and furniture with others featuring a more contemporary design to create a distinctively bohemian vibe.

The kitchen, dining area and living room comprise the hub of family life in the home, sharing a bright, spacious and open-plan area. The kitchen is kitted out with furniture designed by Santos, combining two contrasting finishes: Silk Black LAH for the units laid out against the wall, and Innsbruck White for the island. The contrast between black and white helps to visually delineate the different areas, and is perfectly in keeping with the rest of the home. Furthermore, the clean, minimalist lines of the units make flawless integration with an interior design with its own personality easy.

The space is organised around a large central island with a Laminam worktop, which aids the transition between areas. The island, aside from holding the preparation and cooking areas, offers numerous storage options on both sides: drawer unit and hob unit on the inside and four base units with shelves on the outside. 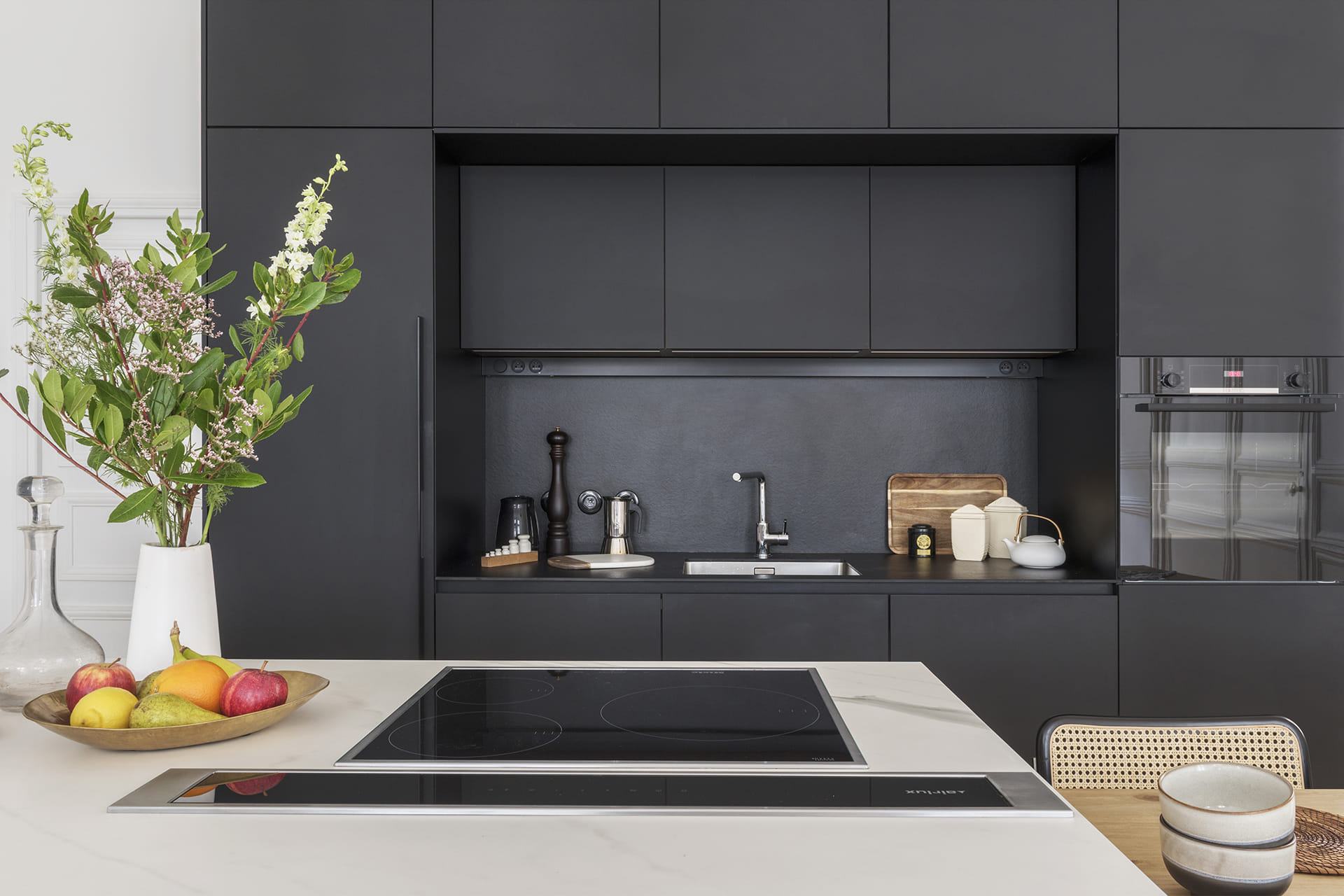 The rest of the furniture is laid out parallel to the island, comprising an impressive row in a black finish which is attractive, practical and versatile. The composition includes a central washing-up area, with two tall units located at the ends, housing kitchen appliances and storage units. 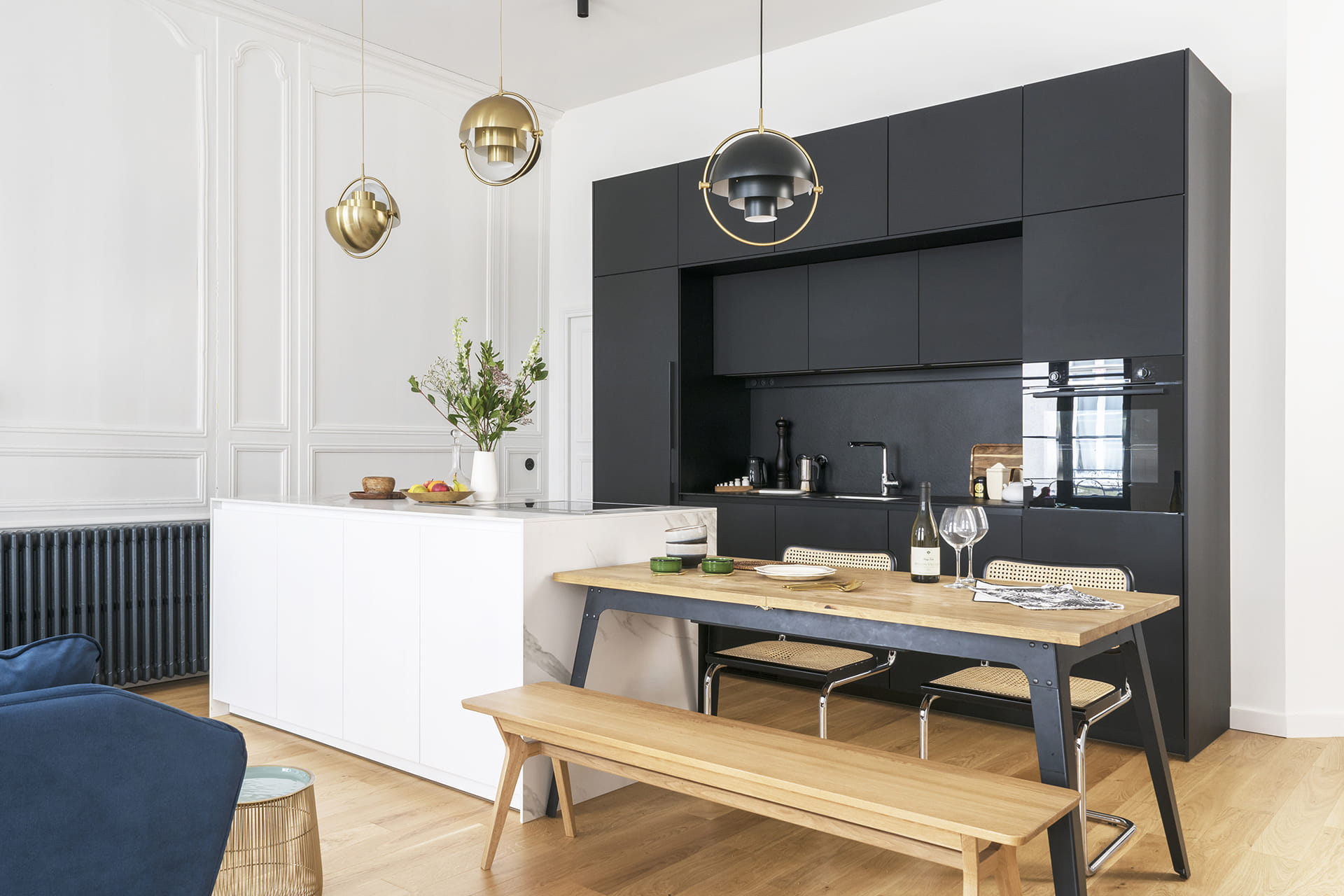 The dining area is located right beside the kitchen island, kitted out with a La Redoute extendable table, Marcel Breuer chairs and a Made bench. A Gubi lamp with a black finish provides lighting. 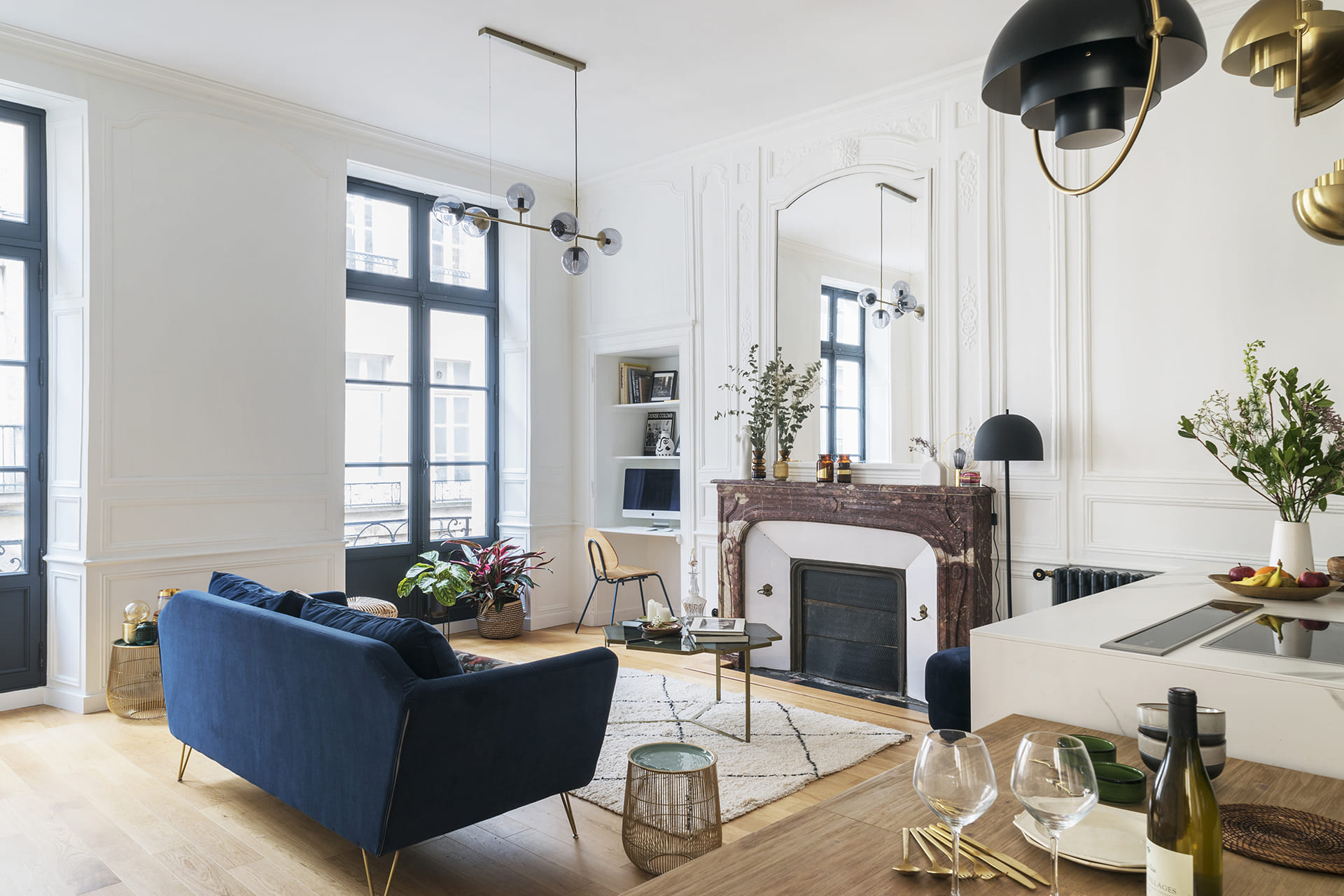 The living room is found right in front of the kitchen and dining area, benefiting from the natural light that steams in through the large windows. It features a Bolia lamp and La Redoute sofa, which faces the fireplace recovered from the original building. 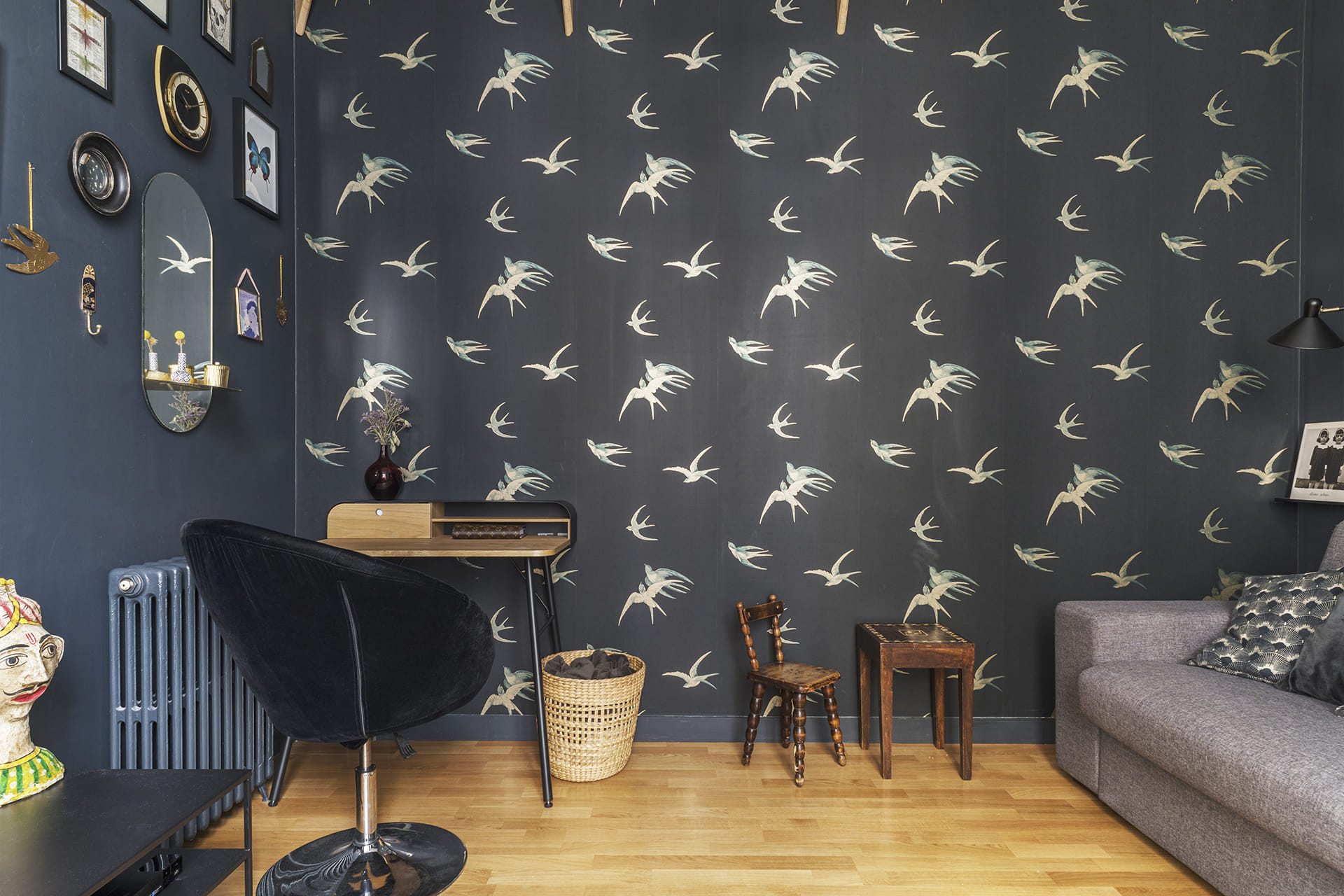 The home has another family room: a TV room where the entire family can enjoy watching a film together. 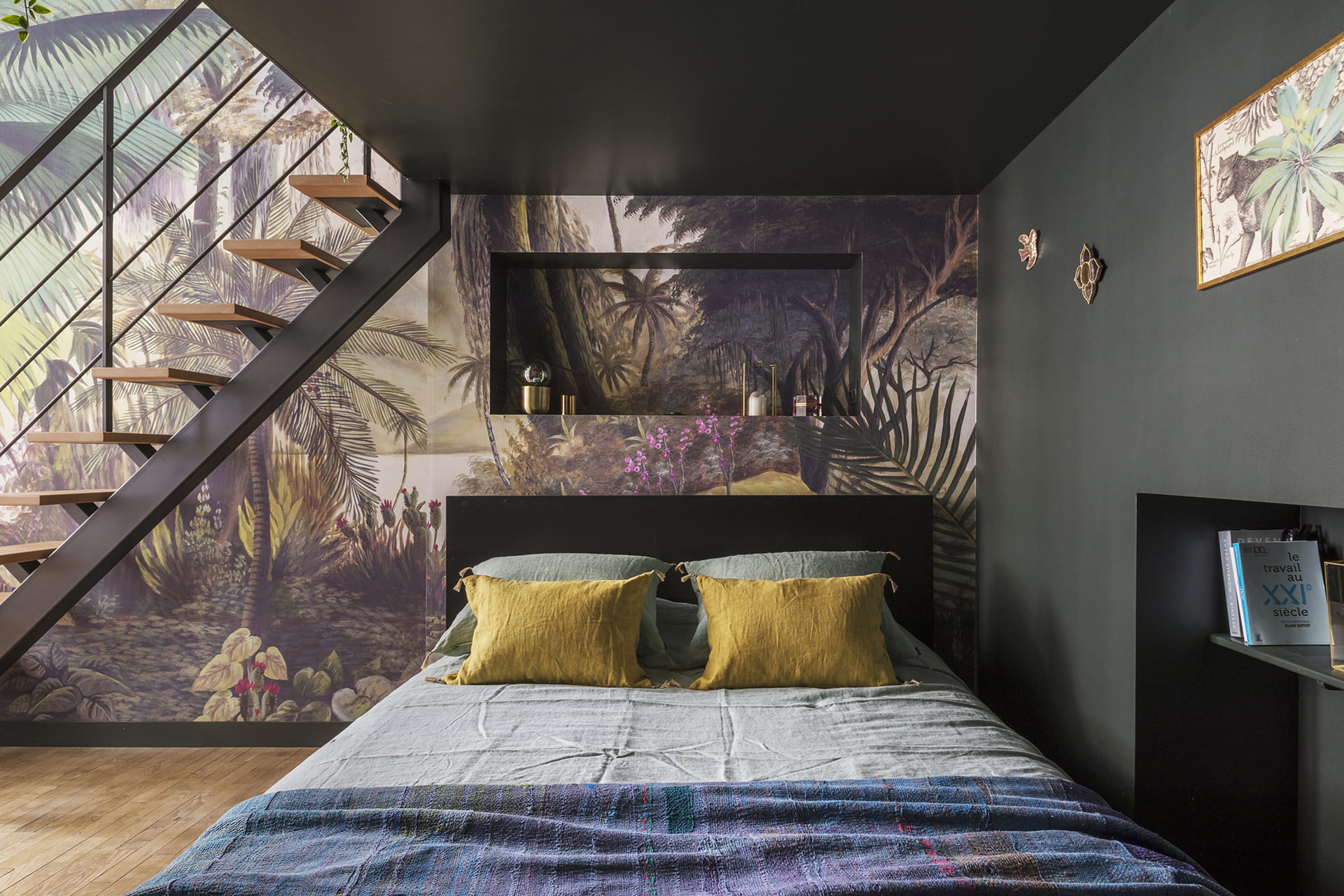 The bedrooms and bathrooms are wonderful examples of how this renovation was meticulously designed and carried out. To make the most of the ceiling height and gain valuable additional space, two lofts were created: one in the master bedroom and another in one of the children’s bedrooms. The latter is situated above part of the children’s bathroom, creating a nook for the tub area.

The lesser amount of natural light available in the master bedroom has been taken into account, using dark colours and wallpaper to give it a nocturnal, serene and secluded feel. The staircase, aside from providing access to the loft, contributes towards reinforcing this sense of seclusion. In contrast, light, lively and carefree colours were used for the children’s bedrooms, which are brighter. The most defining features of the bedrooms are carried over to the bathrooms, with a predominance of dark hues in the master bathroom and light hues in the children’s bathroom.

Kitchens designed by Santos, as seen by photographer Héctor Santos-Díez

Subscribe and we’ll keep you updated on the latest news on our kitchens.

Looking for ideas for your kitchen?

Do you want a Santos kitchen?

Find the reference and ID code
for your Santos product

1) Locate your furniture’s identifying label. You will find it on the inside of the sink unit in kitchens, or on the guarantee card for the rest of the products.

2) Scan the QR code on the label with the camera of your phone or tablet or manually enter the reference and ID code on this page.

3) If for any reason you are unable to access the identifying label, please ask your Santos dealer for the reference and ID code for your Santos product.

* Registration only available for Santos furniture purchased by private customers from April 2019 onwards.